Pest Control Near Me In Key Biscayne 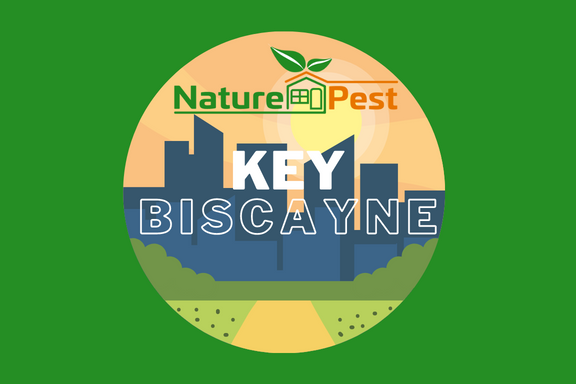 Nature Pest is a local family-owned pest control company dedicated to natural and organic compliant pest management serving the villages of Key Biscayne with the finest in eco-friendly pest control, utilizing a holistic pest control process to protect people and pets from pests and pesticide exposure.

Whether it’s ants, roaches, fleas, ticks, mosquitoes, or rodents we have the solution for you.

Sugar ants in South Florida are the most common pest complaints. 50% of all pest control calls in key Biscayne are related to either a tiny ant called Ghost ants, reddish fire ant looking Big Headed ants, or black crazy ants.

Our proprietary process allows us to control all major ant species with zero indoor insecticide spray which means no pesticides on little hands or paws.

Ghost ants are the smallest ants that invade homes, they are the most difficult ants to control for several reasons, why? Because they are not sugar-feeding ants only, ghost ants are omnivorous ants feeding on glucose, carbohydrates, proteins, and oils. They thrive in busy environments and disturbances cause them to move and multiply. Since they make multiple nests with multiple queens and collaborate among each other in a network, they can make a nest behind an outlet, another behind a cabinet door, and then another in your coffee maker then make a trail outside behind the gutter, and on and on it goes.

Bigheaded are ants that can make mega colonies if 30 miles, when they invade a neighborhood, every home will eventually have a big-headed ant infestation, a one-time spray service will never solve the problem, you need an ongoing preventive treatment to manage them.

Big-headed ants generally will nest in the ground but since they do not make mounds like the fire ants most people don’t realize they have thousands of nests under their lawn. They make their way in through holes and cracks in the foundations of the home like how termites get in.

Baits are the best solution for controlling big-headed ants, however since they are also omnivorous, they can survive by eating proteins from other dead insects like beetle and roaches, to devouring a dead animal like a bird or rodent. This makes control very difficult even for seasoned professionals since we must change our baits from protein baits to glucose baits and use only non-repellent liquid insecticide barrier applications on a routine basis.

Crazy ants specifically the longhorn crazy ant is a predominant ant pest species in Miami and all of Florida, The crazy ant is a relatively easy-to-control ant with baits.

During their mating season, they will produce wings and fly getting into homes through old, damaged windows and doors.

Carpenter ants are also a concern, but not a major pest since carpenter ants do not eat the wood they do not cause damage to the home, however, they are an indication that the home has or has had a termite problem and or water damage problem, Carpenter ants invade existing damaged wood and clean out the termite galleries in order to make a nest, there is two nest usually the main nest and the satellite nest in your home.

Locating a Carpenter ant nest can be difficult since carpenter ants generally do not forage for food in the daytime, they primarily come out to feed at night, these nests can be in the attic, door frame, an exterior wall. The way to locate the nest is to observe at sundown for up 1 to 3 hours where you see them and observe where they are coming in and out this makes the treatment easier where we can just inject the suspected nest site, using combination baits in liquid, gel, and granular form with an exterior perimeter spray treatment with a non-repellent insecticide we can control carpenter ants.

There are two species of carpenter ants in Florida, the Florida Carpenter Ants also known as the bull ant, and the Tortugas Carpenter ant. When they are mating, they will produce wings and fly sometimes around the same time as Termites confusing people into thinking they have termites.

There are three main types of cockroaches in Key Biscayne that generally get into homes. The American cockroach and the similar Australian cockroach, and the German cockroach.

American and Australian cockroaches are often referred to in the area as palmetto bugs or Palmetto roaches or giant roaches with wings that fly! These are your general large roaches.

The American cockroach is the largest roach that invades homes because they are what is known as peridomestic roaches meaning they can live inside and outside unlike the German Cockroach which is purely a domestic roach meaning it can only survive indoors it cannot survive outdoors.

American cockroaches can get inside your home from the exterior through holes and cracks. The long-term natural pest control solution is to repair and seal the home from large cracks and crevices especially holes that lead to the attic, Homes that have septic tanks and crawl spaces are more susceptible to large roach invasion, also through the garage since most do not seal completely.

Because thousands can live in your septic tank they get in every time your traps dry out, so therefore you seed dead and live roaches when you come back from a vacation. Crawl spaces are notorious for American and Australian cockroaches, they get in through damaged crawl space vents and doors. A pest-proofing service such as making custom vents and doors will greatly diminish roach infestations.  Both American and Australian roaches can produce an egg casing that can hatch 12 to 16 roaches in about 1 month to 6 weeks. They are the longest-living roach too, living about 3 years, it takes 15 months from egg to adult so if you’re seeing small, medium, and large and other sizes in between, it’s an indication that the problem has been going on longer than you think.

German roaches do not live outside, they are brought into your home via a bag, box, or used furniture and appliances, so even if your home can be immaculate, and you can still experience a German roach infestation.

The most common way is shipping boxes, the number of German Roach complaints have gone up considerably since the pandemic due to the amount of online order, (the chain of custody) and the control methods from manufacturers, to shipping container across the world from China, to shipping companies in the US, then to multiple distribution centers to the delivery truck to your home makes that box a roach motel for German roaches, you get the box to sit it on your counter and leave it there for days and weeks, all the while the roaches climb out into your kitchen cabinets.

Things to avoid when you experience a German roach problem, do not apply the over-the-counter spray, or fog bombs this will make the problem worse by causing them to hide because they detect the insecticide.

There are two main backyard breeding mosquitoes that we must deal with, the yellow fever mosquito Aedes Aegypti, and the Asian Tiger Mosquito Aedes Albopictus both are aggressive day-biting mosquitos, control can be very difficult due to the fact that they may be breeding somewhere else than on your property your next-door neighbor may have bromeliad plants that hold water or plant pots that hold water. The storm drains may be directly in front of your home breeding them you must call 311 mosquito control and have the county treat the storm drains for mosquito larvae. The key to natural mosquito control is finding and removing the breeding sites on your property. A customized mosquito management program is required to give you the best possible experience. A single monthly mosquito misting service is not going to give the control you expect you may have to have a 14 to 21 spray service with a synthetic pyrethroid insecticide with an insect growth regulator to reduce populations enough to enable you to enjoy your backyard again, or an organic compliant mosquito program with biological traps that reduce the population along with a natural mosquito bait on a monthly basis. Living near brackish waters or mangroves can also produce Culex and Anopheles mosquitos that can fly in from as far as 7 miles, and bite late in the evening through the night and early morning.

Rats and Mice populations are on the rise, especially in dense plant environments, the most natural rodent control to prevent rats and mice from entering your home is exclusion pest proofing. Rats need a half-inch opening the size of your thumb to enter your home while mice may enter through a quarter inch the with of a pencil. Sealing holes around your home will be an organic service, for existing rats and mice sitting inside the home using snap traps inside child and pet tamper-resistant stations is the most natural rat and mice control available since it does not require rodenticides, around the exterior to reduce rodent populations there are several organic and traditional reduced risk rodenticides in pet and child tamper-resistant stations.

It was found and named by Juan Ponce de Leon the island Santa Marta and claimed it for the King of Spain in 1513. Being the southernmost U.S. barrier island on the Atlantic coast. Planned by a woman the first town on Key Biscayne was Mary Ann Davis of St. Augustine. The Village of Key Biscayne was incorporated in 1991. Sandwiched between two major parks – Crandon Park to the north and Bill Baggs Cape Florida State Park to the south.