The Christmas Palm also is known as the Manila palm because it is native to the Philippines suffers from sucking insect pests and also from diseases such as Ganoderma and lethal yellowing. 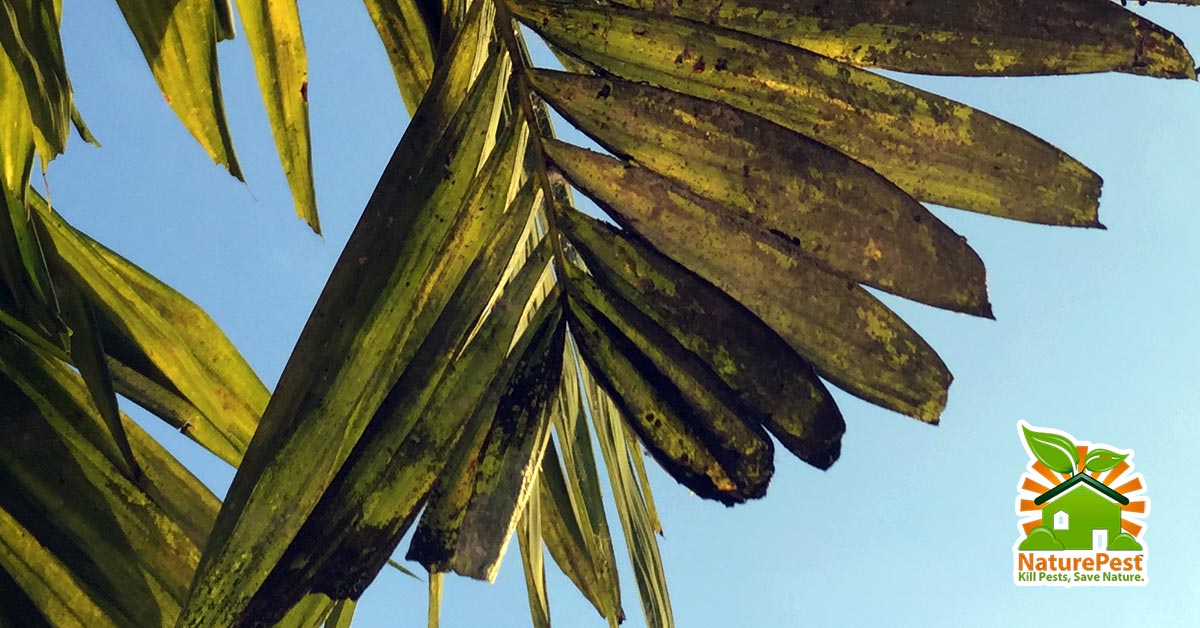 The red fruit could a nuisance to avoid rotting decaying fruit on the ground you should t cut off the flower stalks before they develop fruits.

For optimum growth and vitality and proper palm care, it is recommended you fertilize them with the Florida Palm Special 8-2-12 every 3 to 4 months that includes micro nutrients including boron which will prevent the crinkling of the leaves like an accordion.

Christmas palms also may contract lethal yellowing, the disease is caused by a phytoplasma a bacteria without a cell wall which is spread by a vector planthopper Myndus crudus, that sucks the sap from an infected plant and then travels to another transmitting the disease, the disease causes wilting and discoloration of the foliage before the spear leaf and bud eventually die this is often misdiagnosed as a deficiency and treated with fertilizers.

Since there is no curative treatment for lethal yellowing the only way it can be prevented is by a quarterly trunk injection with the antibiotic oxytetracycline.

Insecticide sprays or systemic treatments do not prevent the insect from transmitting diseases to the palm.

Christmas palms are also susceptible to Ganoderma butt rot, a fungal disease caused by the pathogen, Ganoderma zonatum decaying the palm internally in the lower 4 to 5-foot portion of the trunk. Sometimes the disease will produce a conk on the infected lower part of the trunk.

If you see it you should remove the conk immediately to prevent spores from producing which can spread the disease to other palms.

Scale, mealybug and whiteflies can and often do infest Christmas palms in South Florida, a weekly natural spray is effective at controlling all these sucking piercing insects once they have been found on the palms it is recommended to apply a weekly spray with Eco Via or Essentria for 3 weeks to break the life cycle from egg to adult by killing them during or in between molt stages and then inspect palms every week to make sure the pest problem is under control.

Insects such as scale, whiteflies and mealybugs excrete a sugary substance known as honeydew which will in time and in heavy infestations allow a black mold to attach itself and grow to produce a sooty mold, this mold is not a fungus so there is no need to apply a fungicide. Once the insect problem is under control the mold will subside because it no longer has any food the sugar excrement from the insect.

We do not recommend synthetic parathyroid or neonicetonoid sprays for palm trees because they do not have any better residuals than natural sprays due to photo degradation and the contamination of the environment with air drift and personal contamination when the pesticide falls on you from being under the palm.

For long term control for up to 12 months with just one application without frequent spraying and less contamination to the environment, we recommend performing a systemic root drench treatment with the active ingredient Imidacloprid with a product like Dominion 2L.

We recommend using the lowest dosage on the label measuring the tree trunk for the DBH, to get the Diameter at Breast Height, take a measuring tape and measure around the trunk at about the height of your breast and divide by pi or 3.14.

You Can Exterminate Yourself and Save Money
January 30, 2016

How To Select A Home Insect Control Service That Works
January 30, 2016

This conk on the bottom of the palm tree is Ganoderma butt rot.
January 30, 2016
Listen To The Pest Geek Podcast