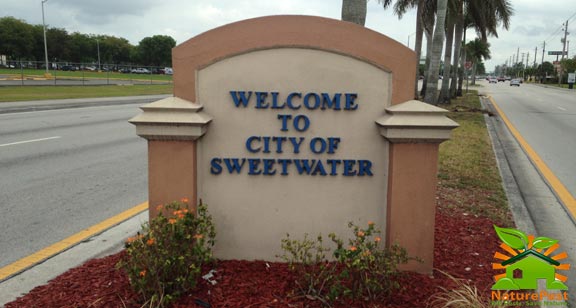 Sweetwater Florida is a city with a great history going back to the 1920’s as part of Miami Dade County Florida with its humid, hot and rainy climate it is a haven for common household insects like ants, fleas, roaches, ticks, mosquitoes, bedbugs, mice, rats and other occasional invaders such as millipedes, centipedes, and silverfish.

If you have a pest problem but you are concerned about using cheep traditional pest control methods that contaminate your home with toxic insecticides sprays, we have a great alternative that controls and prevents pests in your home without contaminating it.
Our proven process is recommended and endorsed by the EPA and The University of Florida as the most effective way of removing and preventing bug problems with the lowest pesticide exposure.

We have a simple saying “we wouldn’t put a pesticide in your home, around your children and pets if I don’t put it in our home.”
We can give you a free quote over the phone without a sales pitch and without any pressure. On top of that we have upright pricing on our web site so you can make an educated decision.

More facts on the City of Sweetwater

Presently, there are only a few vacant lots left to develop. The City’s population has burgeoned to over 19,000 persons of which more than 94 % are of Hispanic origin. The City can now boast of having a full-service police department and city hall complex, four parks, an elementary school, a county fire station, 6,441 residential housing units, 14 shopping centers, over 600 businesses, several churches and a bank.