Spiders freak people out although most spiders in Florida are not poisonous we spotted poisonous black widow spiders in South Miami Dade. 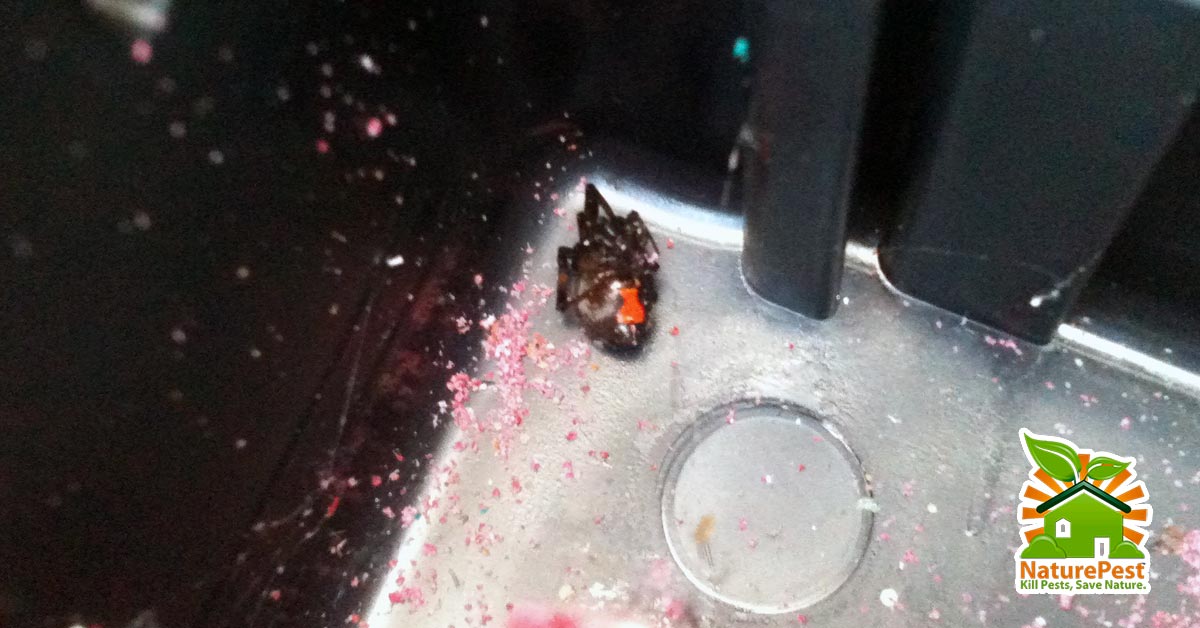 Knowing what to look for in spotting poisonous spiders is crucial to avoid being bitten, if you believe you have been bitten by a spider and are unsure if they are venomous seek medical attention right away as the venom from spiders bites can course serious injury.

While servicing a commercial account in South Miami Dade Florida I opened a Rodent bait station to find black widow spider eggs so if you see eggs mamma spider isn’t far away and in looking inside the box I found the female Black Widow Spider in the corner of the box.

The Southern black widow spider, Latrodectus mactans (Fabricius) is found all over the southern United States

Just one female can produces a beige colored egg sac which can contain around 220 eggs which are retained within the web after during an incubation period of one month and after which the new born spiderlings will emerge from the egg sac.

New born spiders are called Spiderlings which are initially white and will not have the red hour glass on the bottom side as the molts progress will look more adults.

The life cycle from Spiderlings to Adult will vary from 26-103 days for male spiders and 57-122 days for female spiders.

The female Southern black widow will generally live an average of 1.5 years. Male spiders may survive between 2 to 5 months.

Southern Black Widow spiders are notorious for their dangerous bite which contains the neurotoxin alpha-latrotoxin that causes adverse reactions.

Southern Black widow spiders generally live under wood and rock piles, in rodent burrows, and in hollow tree stumps. Indoors in sheds, garages, and basements and generally build webs in low lying areas but their web can be found up to several feet from the ground.

In natural environments most bites occur while reaching under an object inhabited by spiders such as a woodpile or stones, if working in gardens wear gardening gloves can help prevent bites. Inspect for spiders in sheds and barns where spiders can be found, Indoor in shoes that have not been worn for a long time and in old boxes, basements or attics. If working in and around these areas wear gloves and shake out articles before using them.

If you see or suspect you have a Southern Black Widow Spiders contact an Integrated Pest Management professional to identify and treat appropriately.

I often hear a customer say I need the strongest insecticide you have.
February 5, 2016